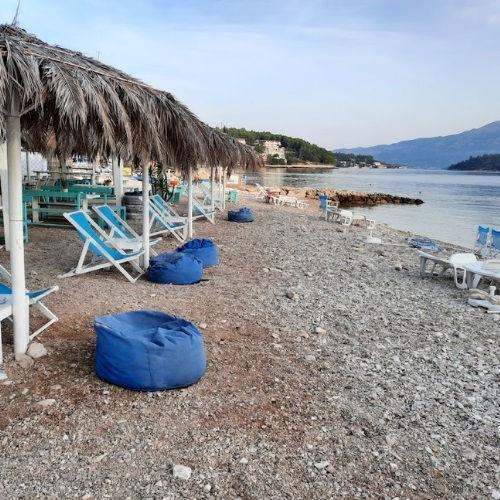 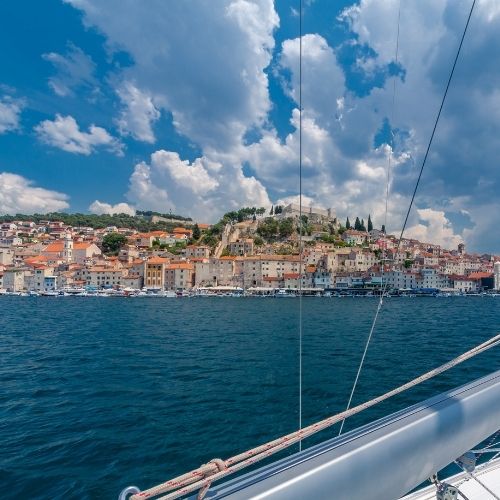 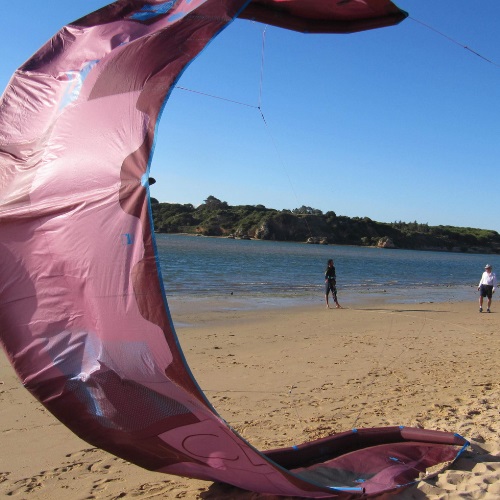 Your holiday takes place in Lumbarda on the island of Korcula.

Lumbarda is a small fishing village located on the eastern side of the Croatian island of Korcula and is easily accessed from both Split and Dubrovnik.

It extends several kilometres around a bay and has hills behind. The White House sits surrounded by vineyards with a panoramic view of the Adriatic Sea and accommodates up to eight people.

Korcula island’s history dates back to the third century BC, where Greek people settled. Smaller houses were built later on (in the 16th century), and many other traditions, such as Sword Dancing, date back to the 17th century.

In modern times, the people of Lumbarda were mostly grape growing farmers, fishermen and stone masons, and these can be seen in abundance on the island.

Today, the island offers a unique destination for tourists who want water activities such as kitesurfing or sailing around the Peljesac peninsula, or relaxing and unwinding by learning about the local area’s history.

This combination of this unique history and the breathtaking views of the island offers visitors a glimpse into this hidden gem in the Adriatic Sea. 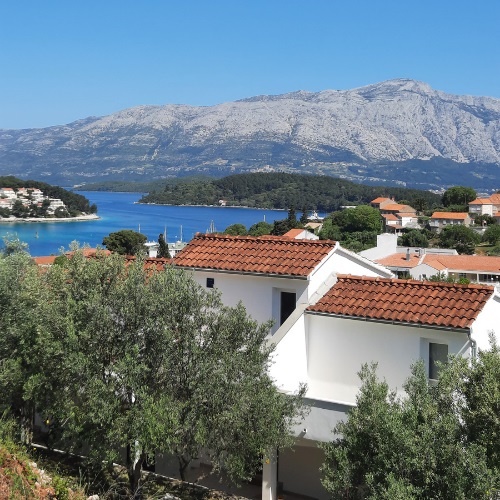 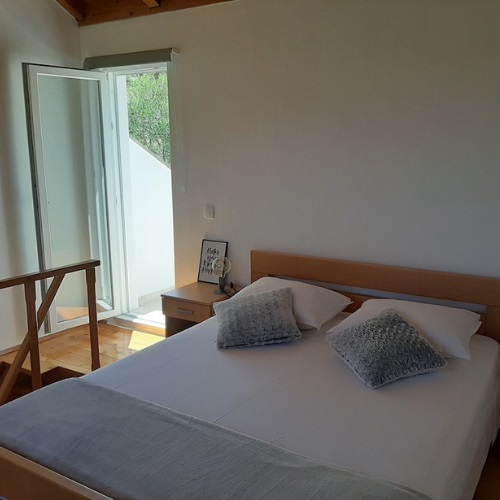 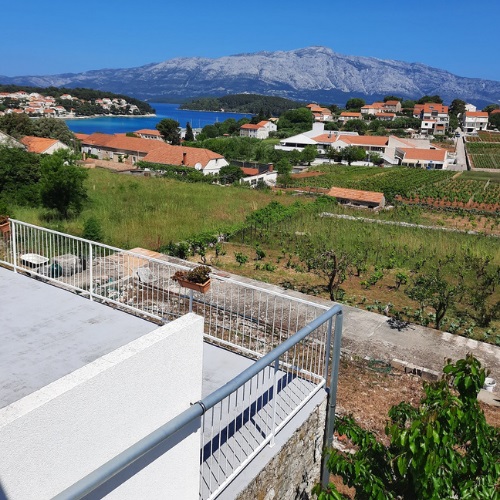 The accommodation sits on a small hill just above Lumbarda town. It is centrally located within 15 minutes walk of all facilities, the wineries and the two sandy beaches.

We ask our guests to arrive after 4pm and check out at 10am. Although we are flexible and will doe our best to accommodate your requirements, please let us know if you are arriving early.

The duplex apartments have two balconies facing north and south; the ground floor apartment is on one level and features an extra-large north facing balcony.

Kitesurfing on Korcula is a dream. With adequate space and perfect windy spots on the island, you’ll enjoy the day kitesurfing whether you’re a complete novice or quite advanced.

Our expert tuition packages are uniquely designed to give you time with your instructor and in the water. Most people on their holiday stay with us at the White House in Lumbarda for a week and choose to take part in kitesurfing over a handful of days.

If you’re a beginner, you’ll join a group of up to six people, be talked through the theory, shown some tips during the practical, and have a fun time practising with everyone else in the group.

Our week long Croatian sailing holidays are carefully crafted to provide you with the flexibility to ensure you have plenty of time to discover each Island’s hidden treasures; and our circular routes present you with different islands to explore on the return journey.

Our qualified skipper has detailed knowledge of the islands and navigational area and will teach you as much as you want to learn about sailing in Croatia.

Korcula has several different walking and hiking routes around the island, some of which are familiar to most locals and others that are “off the beaten path”.

Any level of walker can enjoy these walks or hikes, whether you’re an experienced rambler or part of a walking group at home or are a beginner and want to explore the marvellous views the island has to offer.

Being in Lumbarda, there are a few half-day walks in the area, and some other longer full-day walks in other parts of the island.
We have maps with suggested routes and can help book you a walking activity with a guide. 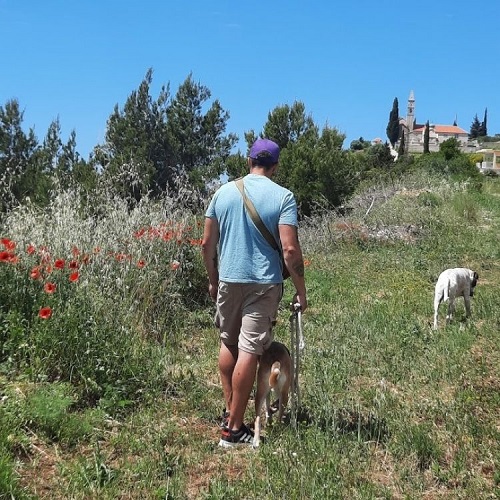 The holiday accommodation at The White House is surrounded by Grk vineyards, which means we’re in an ideal location if you want to sample the excellent local wine and take a tour of the vineyards. Wine tasting is best in the latter part of the day when the sun isn’t as intense, and you can enjoy a glass or two in the warm sun.

Grk wine has been produced for hundreds of years and is considered one of the best locally-produced wines in the area. Our team can arrange your tour with the best winemakers and book your wine tasting afternoon with them directly. These can take place most of the year, and these local professionals are proud to show you around.

There are also several wine festivals several times a year where the wineries bring some of their wine for visitors to sample, compare, and enjoy the historic feel of the village and meet local people. 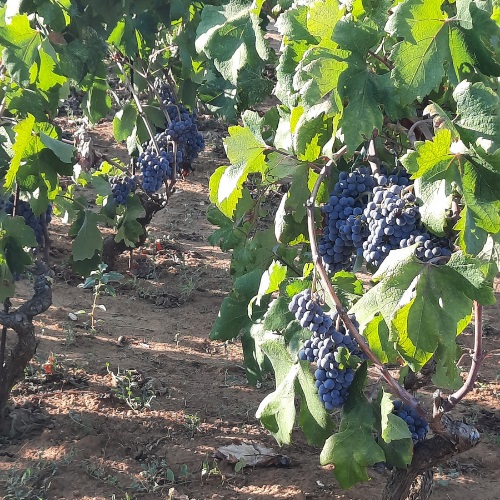 Wine isn’t the only item on the menu that will dance on your tongue and tickle your tastebuds. Food is also a big deal in Croatia, and locally, there are many dishes to choose from.

There is a rich gastronomic history in Korcula old town with local delicacies that every visitor must indulge in guilt-free. On offer will be homemade rustic bread, grilled meats, soups, and fresh seafood that has been caught that day.

Some items that you might want to try include: Peka, Makaruni, Pasticada, grilled fish and meat, and octopus salad. 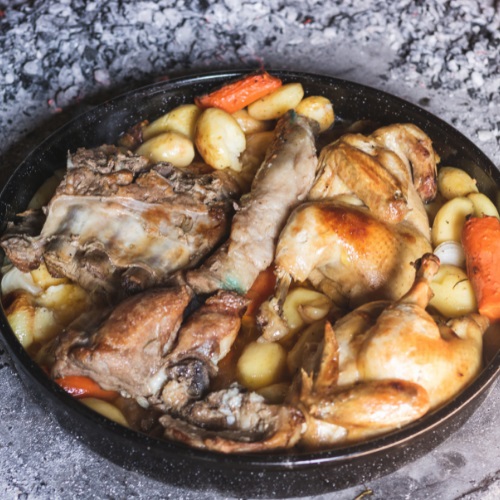 An adventure as you paddle through the crystal clear waters in the Korcula archipelago. Some parts of the island are best accessed using a kayak, so you may discover some secluded beaches that not many other people know about.

Exploring the coastline by kayak is something else: you’ll be able to take in the breathtaking views of the island by the sea while experiencing island life on the water at your own pace. Paddling along with the sun beating down and the slight breeze in the air, this is one activity you don’t want to miss. 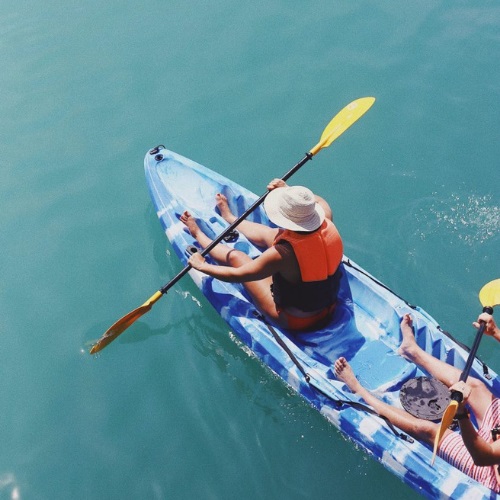 By Air to Croatia

Check before travelling to Croatia whether you need a visa to enter the country. At present, Croatia is part of the European Union but not part of the Schengen Area.

The Island of Korcula is centrally located between Split and Dubrovnik and many of our guests enjoy a night or two exploring these beautiful towns before visiting us so either of these two airports are good.

Car hire is available from both airports.

From Split, there are two ferry companies that will transport you to your holiday accommodation in Lumbarda, Korcula. They depart once a day in low season (October to April) and up to five times a day in high season. The transport time is between 2 and 4 hours depending on the ferry route, and costs between 60 – 150 kn for foot passengers.

From Dubrovnik there are three ferry companies that will transport you to your holiday accommodation in Lumbarda, Korcula. They depart once a day in low season (April to October) and up to seven times a day in high season. Transfer time is less than from Split between 1 ½ hours and 2 ½ hours depending on the route and foot passenger cost varies between 70kn and 150kn.

We will collect you from Korcula Town ferry port. Transfer time from the ferry port to Lumbarda is 15 minutes. Please give us 48 hours notice of yoru arrival time.

Total Activity Holidays offers a unique holiday experience on the island of Korcula.
There are many different activities on the island, from kitesurfing and sailing on the Croatian coast,
to touring the historic island and enjoying the local wineries.

Whatever type of holiday you want, we can help you create it.

VIEW THE SHORE-BASED ACCOMMODATION
We use cookies to ensure that we give you the best experience on our website. If you continue to use this site we will assume that you are happy with it. Privacy